The Failures Of Black Communities Rests On The Shoulder’s Of Black Men.

In the various different conversations centered on the adversities of the black community (Especially in America), the black woman and her contributions to the community’s failures is largely discussed and examined. Why is the examination of the black man’s contributions to the community’s failure missing from these conversations? If black men are to be examined and discussed, what contributions should be expected of him to help safeguard and advance our communities? When it comes to the solution on how we can overthrow white supremacy and systematic oppression; economics, and the elimination of self hatred seems to be the primary focus to achieve black liberation. It seems as though every solution is discussed, EXCEPT for the active PROTECTION of black lives, especially the lives of black women and children. Despite the oppression from systematic racism having multifaceted strategies, one can not suggest that the protection of black lives is not only critical, but vital to our PRESERVATION.

Perhaps, since the black man seems to escape examination on how he contributed to the failure of the  black community (while also not examining the lack of protection for the black community and its people), one can conclude that he can fulfill this vital role of protection. Not only can it be suggested that he can fulfil this role, but it can also be suggested that his weak position of security is what is sustaining white supremacy and black oppression. Securing the prosperous future of the black race is a struggle. The black woman and her children are too often abandoned by the black man. Not only that, but let’s factor in the crimes being committed in the black community by black men. Drugs, Robbery, and gun violence is causing black communities to become an unsafe and unhealthy environment to live in. Black women are being abused and killed in greater numbers than other races of women, by the same black men that are expected to protect her. A majority of black women are also raising their children alone or with little help from a black man, which many of whom are in poverty. Where is the black man during all of this? Why has the black man abandoned his position, and left his children and their mothers to suffer? Why are they also actively PARTICIPATING in this suffering? Let’s take a look at what one black man said about this. Based on what this man says, he feels black men are not respected enough or valued enough by black women to protect them. This is just one excuse of MANY that I have found from various black men: 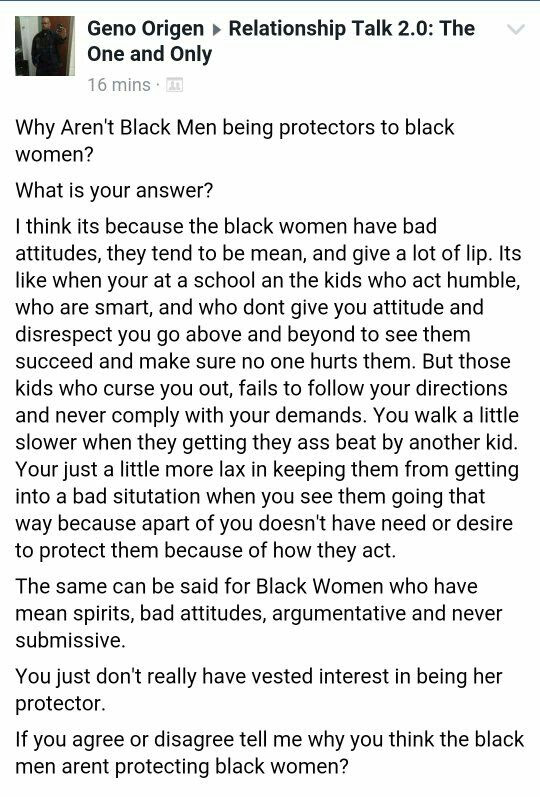 One must also consider the global issue of the lack of protection from the black man. In Africa (Especially in West African countries), the numerous inter-state to intra-state civil wars have cost the lives of African people greatly. Another thing to note, is that the raping/kidnapping of women and girls, and the conversion of her male children to become child soldiers, is a reoccurring issue. In fact, because of the constant conflict in various African countries, many African women had to take measures into their own hands in order to protect themselves from the abuse and backlash of civil war conflicts. From marrying other straight women, to creating a women only village. In many ways, I see that black women have to take matters into their own hands in order to protect themselves, while simultaneously liberating her children and her people. Black men collectively are simply not dependable to protect black women, and this is not only here in the U.S, but GLOBALLY, as previously described. When is the black man going to collectively start making progressive changes to liberate his people? Or has he become too comfortable?

Black women globally are waking up, and pushing hard to take her community responsibilities seriously. While I may personally know of many black men that are rising to the call, I can’t help but notice this is not the majority. I can’t help but notice the struggle these brothers have to recruit other like minded brothers for their causes. A prime example is my brother Nommo Userkaf and the Protect and Defend Network which centers on protecting the black women and children. I shared from him and the organization repeatedly and resulted in minimal black men signing up. What is holding them back? Today, I’ve been further proven to see it’s FEAR. I was infuriated to see that a black man posted a meme stating that “his penis is the greatest fear of white supremacy”.

One thing that the black man haven’t stopped doing since the beginning of time, is have sex and procreate. Not only that, but despite black men abandoning his children, and actively participating in the violence and crime in his communities, he still has time to procreate. From what one black man said, the white man fears “genetic annihilation”, so reproduction is a priority. However, population growth will not affect white supremacy if these children that are born are not protected, unprovided for, educated by a racist school system, dependent upon a white supremacist government, and destroyed by mental slavery/ illness. Europeans have been able to colonize the indigenous people of many countries where they were vastly outnumbered. This is a historical fact, to include African countries. So I think this is a foolish theory.

Why not just admit the truth: Black men and their fear of white supremacy is resulting in his lack of courage to effectively fight against systematic oppression. Too often have we seen white supremacy send its forces to murder our people, without resistance (police brutality). Too often we have seen Europeans colonize our homelands, steal our resources, and leave the indigenous people in impoverished conditions. The lack of resistance is what allows this to happen. White supremacy and the black male cowardice goes hand in hand. Waiting for a new day to usher in, will be for the black man to redirect his attention from destroying the black community with his domestic terror, and form an organized structure to fight against systematic oppression. I guess this sounds too much like right. Meanwhile black women and children are caught in the crossfire. How long is the black man going to allow the white man to do whatever he wants to him and his people?

© Tanisha R. Coleman, 2018. Unauthorized use and/or duplication of this material without express and written permission from this site’s author and/or owner is strictly prohibited. Excerpts and links may be used, provided that full and clear credit is given to Tanisha R. Coleman with appropriate and specific direction to the original content.

This site uses Akismet to reduce spam. Learn how your comment data is processed.

The primary focus of this blog and website is to provide wisdom, and share my personal journey as a black woman in search of her own spiritual destiny and purpose. My blog topics  center the experiences of myself and black women while aiding to achieve a bond in spirit of sisterhood and self-discovery. I am a believer that the healing of black women, mothers, and children is an essential part of the Universal healing of our humanity. I share as well my dreams and visions with clarity, knowledge, and insight to assist black women who wish to transform into self-healers, and creators. Walk a few miles in my shoes, or along with me and I hope you enjoy the journey.